As I mentioned in an earlier post, I came into the shed and found an oil drip on the floor, under the drive-shaft. Further examination found oil under the rubber boot. What I thought was a drain hole in the swingarm was a small set screw holding the carrier bearing in place.

I suspected that the gearbox oil seal was leaking and sounded out a few members about removing the swingarm and replacing the seal. Robbo, the club technical officer, explained the process, which seemed pretty straightforward. The trickiest part was getting the driveshaft back onto the gearbox spline – but more tedious than tricky, though. At the Spag, I queried a few others. One suggested checking the oil levels in the gearbox and final drive.

Head smack! I should have done that first. On my Stone, I’d had the phenomenon of final drive oil migrating up the swingarm and dribbling out of the rubber plug in the right-hand chrome swingarm nut. On the Guzzi Exchange forum, Pete Roper had suggested putting a dab of silicon on the rubber bung and keeping an eye on the oil level. This I did, and hadn’t had any problems during the bike’s life. It kept the uni-joint lubricated, anyhow.

The gearbox oil level was fine. I placed a rag under the final drive and removed the level plug.

Remember those old gangster movies where Elliot Ness and the Untouchables raid the illicit booze cellars, smashing into the barrels with axes and sledge hammers? Remember how the booze cascades out in a fountain?

The oil spewed out of the final drive like a Texas blowout, overwhelming my pathetic rag and pooling over the floor. I ran around frantically looking for more rags to restrain the flood. That stuff stinks, doesn’t it?

Instead of 250ml in the rear drive, some clown had poured in 750ml (a “not unknown” amateur error when interpreting the owner’s manual “transmission” references). He must have been an ape, too, because when I tried to remove the top fill plug, I had to hang onto the EV’s pannier rack to stop the Cali rolling of the centre-stand and use all my leg-force against the spanner to undo it. Fortunately, the thread wasn’t stripped.
Since adding back 250ml, the drip has gone and the seals seem ok. Lesson learned: always do a full service when you buy a used bike.

Some weeks later, the clock on the Cali EV clicked over 40,000km so I ran the big girl up onto the bike lifter and strapped her down. I wanted to do a full, post-purchase service: the tappets, plugs, engine oil and filter, air and fuel filters. (I’d like to do a throttle-body sync but don’t know how to – yet).

First job, drop the engine oil. I leaned on the ring spanner of my Honiton tool set – bought years ago from Andy Strapz, and a good piece of kit it is, too – to undo the sump plug but it didn’t move. I leaned on it some more. I put all my weight on it! I felt as if the whole bike and ramp would fall on me but it still didn’t smegging move! Who was this guy who treated machinery so?! Casting around for an extension, I spied my old Stilson pipe wrench, opened the jaws to fit over the Honiton spanner, and leaned on the extra 18 inches of leverage that it gave me. Slowly, slowly, the plug gave way and soon the oil was pouring out. 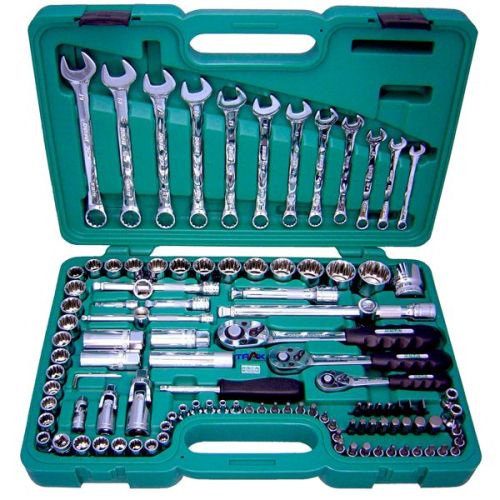 Righto. Drop the sump to access the oil filter. Fortunately, the sump screws were easily undone and the gasket came away in one piece. I took the sump over to the bench and placed a cup-type filter remover over the UFI. It wouldn’t budge. Gave it some berry and the cup slipped around the filter. OK. Tried another type of remover but still it wouldn’t budge. It was difficult to apply much force because the sump was hard to pin down. I took it outside to a wooden garden bench, jammed it into the seat corner with my knee, put my weight on it, and placed one of those three-pronged gadgets over the filter. I leaned into it. The filter began to crush and warp! Jaysus! Who was this guy?! I might have to zap some roofing screws into this bastard to get it off. I tried again, expecting to rip the filter off its base, but imperceptibly it started to move. I kept the pressure on and it slowly rotated off. I’ve changed a lot of oil filters in my life but I’ve never had one that tight. I spun on a new Ryco RMZ126 filter and a stainless-steel hose clamp, replaced the sump and gave her a belly-full of Penrite 15W-50 Diesel.

Now the rocker covers. The same, presumably, great galoot had smeared some indescribable glue-like crap on the gaskets so they remained attached to the metal as the covers came off. I tried removing them with a blade but eventually obtained some gasket remover to soften them. It was an hour’s work to scrape everything clean with a blade and kitchen scourer.

The tappets are supposed to be set at .10/.15mm. I could barely get a .10mm feeler blade into any of them! Smeggity smegging smeg! I cranked the engine over, looking for Sinistra and Dexter, checked TDC with my thumb and a straw, and reset the tappets to spec. New NGKs, new gaskets (with a smear of grease!) – goodo. 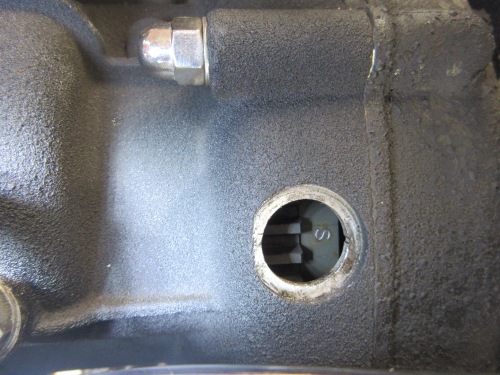 The fuel filter was a bastard, too, because some dozy bod at the factory had run the oil breather hoses either side of the filter, leaving no room to extract it! I detached one hose and ran it behind the filter, as it had been on my Cali Metal. Replaced the 15-year old fuel filter – obviously no one else had removed it – with much grumbling and cussing as petrol invariably leaked out over my engine, despite all the rags I’d jammed in there. New sealing washers, new air filter – job done.

Replaced the tank and, with a squeal from the fuel system, my pretty Rubenesque gal fired right up. I took her for a run up to Harrietville and back, the smell of petrol in my nostrils as it evaporated off the top of the engine. Checked – no leaks.

“She’s running like a dream, she’s final filter clean, with Amoco…” …well, you know the rest.