During this cold winter, I joined the Moto Guzzi Club of Victoria’s “Bare Knuckle Run to Bendigo”

(So called because this is how Bendigo was named.  The old gold mining city of Bendigo is indirectly named after William Abednego Thompson, an English bare-knuckle boxer.  An early Australian shepherd on the Ravenswood Run was also a bare-knuckle boxer with a style reminiscent of Bendigo, and hence was given the same nickname, which was then applied to the area as Bendigo’s Creek.  The town that grew up around the area in the 19th century was named as Sandhurst but reverted to Bendigo in 1891.)  https://en.wikipedia.org/wiki/William_Thompson_(boxer) 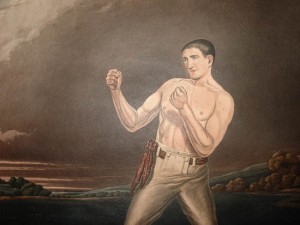 I joined the ride at Lancefield.  It was 6C when I rode the Breva 1100 into town at 10 am and I stomped around with very cold feet with another chap from Daylesford.  No wind, though.  Eventually the guys and girls rolled into town for a coffee –  30-odd bikes – then we were off.  Ash, the ride leader, set a cracking pace which I did not try to emulate.  He took us over various roads including Burke and Wills Track, which I detest – it’s narrow and rough – and that’s on the sealed bits!

We pulled into the Brougham Arms for lunch.  Quite nice, good service and menu and plenty of parking for bikes.

Adam rolled in from South Australia with a Centauro he’d bought the day before.  The oil over the left side of the bike was a real pisser and depressing until Pierre had a look and pronounced a leak from the oil pressure sensor.  Fortunately our new Presidente had come in his Falcon ute (don’t ask why, it’s too embarrassing) so the Centauro was freighted to Melbourne for surgery. 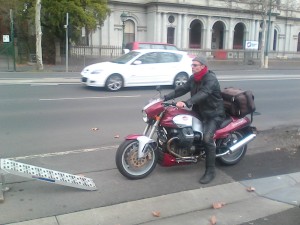 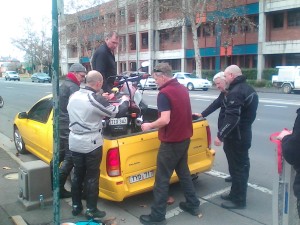 After visiting a private collection of Indians (motorbikes!) the club went one way and I headed the other.  It was 7C as I entered Lancefield at 4 pm.  Too smegging cold!