Life gets in the way.  We took a month off to drive to Perth and back, towing an Avan across the Nullabor, to visit our daughter.  Covered about 9000 kms all up, visiting rellies and so on  Missed the Spaghetti Rally!

Then the bushfires surrounded us, so we were stuck at home in smoke for weeks on end.  Couldn’t leave in case the emergency services blocked off the roads while we out and wouldn’t let us back in.  Then heavy rain (“It won’t rain until May” said the BoM) and flash flooding.  And it’s pouring as I write this.

So we only got in a few local rides for a coffee and to keep the engines oiled up.

Now we’re locked up due to the Corona Virus!  Apparently, riding my Guzzi is a bigger threat than joining the walking and jogging throngs out exercising, so I’m not supposed to go for a fang.  Going out for a slab of beer from a supermarket filled with shoppers is OK but not riding my Guzzi on my own.

But we’re allowed out for specific reasons such as getting food.

We’re having kidneys on toast for Sunday brekky, the Chief announced.  And none of that wussy devilled lambs kidney.  Get me an ox kidney!  And a loaf of Milawa Cornbread for crispy toast!

Sadly, ox kidneys are not sold in town but require a trip to another location (sob).  Hmmm, should I take the tin-top or the bike?  Easy peasy.  But which Guzzi?  I tend to alternate between bikes so it was the Cali EV’s turn.  Off I sped to Myrtleford Foodworks, which seems to be one of the few supermarkets that sells ox kidneys.  I took the direct route, the Cali running like a dream in the sunshine.

Packed the merchandise and considered the run home.  Such a nice day, it’d be a shame to waste it.  I headed north to Mudgegonga for the turn onto the curvy Carrolls Road. 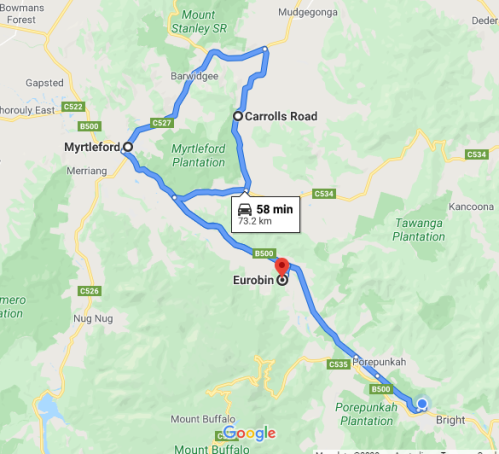 Looking south on Carrolls Road, Mt Buffalo covered in cloud in the distance.

Carrolls Road wriggles along quite pleasantly, especially today without traffic.  A lovely valley with Mt Buffalo often in view.  I didn’t have any 4WD up my arse, or running wide on the bends coming towards me.  Dodged a large black snake – I often encounter snakes on this road.  The recent rain had washed gravel and sand into some of the bends.  Carrolls Road ends on the popular motorcycle fanging route, the Happy Valley Road, which links the Great Alpine Road in the Ovens Valley and the Kiewa Valley.  Motorcycles coming between Corryong and Mansfield often take the Happy Valley.

A bit more twisting and I came into Ovens ( home of the Happy Valley Hotel , a popular motorcyclist pit-stop).

From here I headed home, with a break at Eurobin for a leak at the Murray to the Mountains Rail Trail dunny. 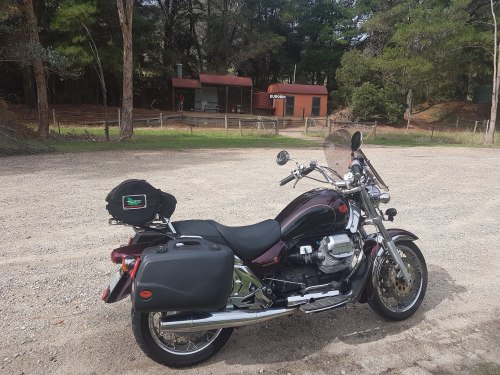