Run to the Coonawarra

Had three days off so we ran the bikes over the border to South Australia; the Coonawarra, the home of red wine.

Tracked through Daylesford, negotiating the usual Sunday market maelstrom, then back roads from Creswick to Lexton, and into Ararat for lunch.  It was the annual Gaolhouse Rock festival so was pretty busy with music and old cars.  A tug and glider circled the town, which is perched high with views to the nearby mountains.

Then on to the Grampians via Moyston, the birth place of Australian Rules Football, the first codified football game in the world.

Thomas Wills adapted the game from one he played with local Aborigine kids.  I understand that it’s the only football game with no off-side rule and players opposed to each other in positions over the whole field.

From there we passed through Halls Gap and ran down the Grampians Road, turning off at the Victoria Valley Road.

This was a pretty valley with parkland-type  paddocks with grazing sheep; the “waltzing Matilda’ country of Australia.  Onto Cavendish for a drink, then Coleraine and Casterton, the birthplace of the Kelpie – with statue.  Interesting road between the two, running along a high ridge with valleys and “wales” (!?) either side.

Then a fast run to Penola.  The Croweaters welcomed us with a sudden deterioration of road surface, but it improve eventually to the normal high standard of SA roads.  Sunday in Penola was pretty quiet.  We booked into the first pub we found, Heyward’s Royal Oak Hotel.   Very nice, but we had a room at the front and couldn’t sleep for all the noise of passing trucks; all night they ran and sounded like they were coming through the wall.  A rear room would have been ok.

Monday we were up early (!) and did a run up the road to Coonawarra – yes, there’ a lot of grapes – then sped off south to Beachport for brekky and a coffee. 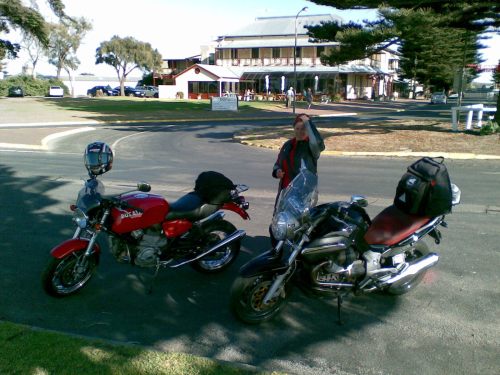 I like Beachport.  It’s unpretensious and easy; not like its sister, Robe, up the road filled with gaudy and crappy sarong and t-shirt shops.  Closer to Adelaide, you see.  The beach front is lined with Norfolk pines, and the bay is bisected by a long jetty.  Very picturesque.

We mosied down to  Southend – don’t waste your time – unless you like fishing.

Passing wind farms near Millicent, we stopped off at Mt Gambier, then took the lovely long run through Nelson and pine plantations to Portland.  Stayed at the Clifftop, well worth he cost; fantastic view over the bay and harbour – and quiet!  Windfarms in the distance across the bay.  An amazing technology, converting free wind energy into taxpayer-subsidised profits for rich investors!  A humid night with some thunderies around.  This bay is one of the few in which you might see a Blue whale.  None this time, though.

Woke to a FOG!  Set off in 13C, knowing it was going to be 32C in a few hours time.  Took a wrong turn and ended up in Heywood, where we stopped and had a coffee and bacon-and-egg sanga and waited for the fog to lift.  Then cut across to Woolsthorpe: 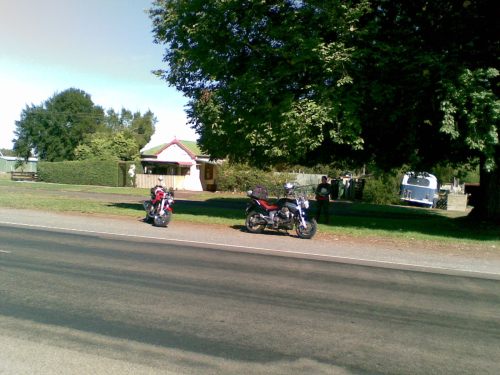 then up through Caramut to Lake Bolac for a drink (more effing windfarms) ; then on to Beaufort via the Streatham-Eurambeen road – a beauty – for lunch.

Finally, past another smegging windfarm, pouring the fossil fuel into the Guzzi and Duke,  to Creswick and Daylesford and home.