Mandello de Lario is located on the eastern shores of Lake Como in northern Italy.  Lake Como resembles an inverted “Y”; Bellagio is on the junction, the city of Como is at the bottom of the left-hand arm and Lecco at the right-hand arm.  We had booked online and found a hotel at Vercurago, just south of Lecco, about 20 minutes by train from Mandello.  The lake is surrounded by mountains – it’s only a few kilometres from Switzerland – and the shore line is narrow, so numerous tunnels stitch in and out of the ridges and spurs to cater for the highways and train lines.

After a week in Scotland visiting my ancestors, we had taken the train from Edinburgh to London Kings Cross, walked the 50m or so to St Pancreas, through passport control, to catch the Eurostar to Paris then the train to Milan. 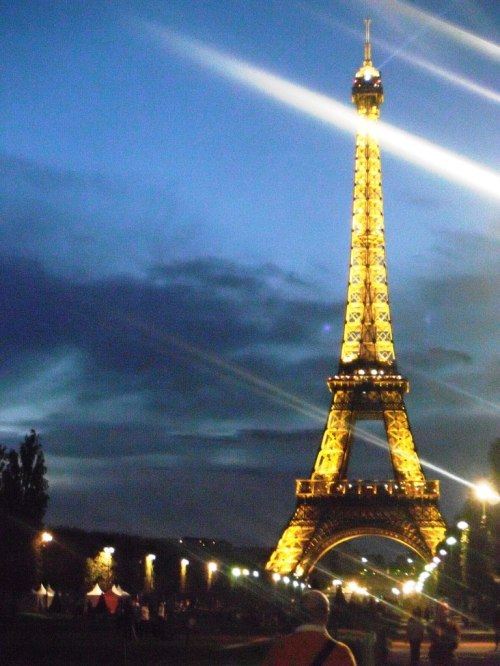 The train passes through broad-acre farms before entering the mountains, winding its way through valleys, around lakes and through alpine-type villages, with castles and monastery’s on adjacent hills.  It’s all quite magical.

Unless, of course, you have the Australian From Hell in your carriage. A teacher from Canberra with a piercing voice, she zeroed in on passengers.  There was no escape from her relentless verbal stream.  A taxi had forced her out of his cab in the middle of the night in the “ Latin quarter of Paris “ (there isn’t one – it’s the university district near Notre Dame – we sided with the taxi driver),  her husband had left her 3 months after their baby was born (a tough one – but the husband got the nod).  A French woman went up to her and said “Ssshh, Madám” in a fruitless effort for some peace.  The AFH taught us (no-one was out of earshot) about Australia, Vegemite, that Kakadu was in Queensland, etc.  Then she got stuck into the French, their arrogance, rudeness, poor service, and how none of this would happen in Australia.  Jane couldn’t contain herself any longer and went for the throat, suggesting that if she was going to denigrate an entire people and their country that she do it out of their earshot.  A sharp to-and-fro ensued before the AFH spun off to her seat with a parting snap, “Well, they can’t speak English anyway!”.   A couple of minutes after peace descended on the carriage, the French woman behind us touched Jane on the shoulder and said, “Well done, Madám”.

Just before the border, Italian police came along checking passports.  As with all the Italian and French police and paramilitaries that we saw, they were young, trim and fit, unlike most Australian police.  They carefully examined Jane’s UK passport, ignored my proffered Australian passport, but the passport of the young lady adjacent us required closer attention.

At the border the train broke down and after 3 hours of chaos and rumours in the heat, we were bussed to Torino.  We saw our first south-bound Guzzis.  We caught a train to Milan but despite earlier assured rumours, our ticket wasn’t honoured and we had to buy new tickets from the conductor, carefully hand-written.  Like a spaghetti western the noisy train, lacking air-conditioning and filled with cut-throats, crazed drug addicts and prostitutes, lurched across Italy.  We arrived at Milan, hours late, to find that the last train to Vercurago was at midnight.  And we didn’t know where the hotel was, anyway.  A taxi “tout” approached us and after a quick call to our hotel, 70km away, said 130 Euros, and when our faces fell, but for you, 110.  We didn’t care anymore; we had been up since 5am, hadn’t eaten, run out of water, and it was about 28C, windless and very humid.  We grabbed it.

The old Fiat, without any Taxi signage, careered through the hot humid, peak hour traffic.  Andrea drove by problem solving as did everyone else from what I could see.  A swarm of scooters weaved between the cars and trucks.  The handbrake light glowed red on the dashboard.  Twenty kays from Vercurago, Andrea telephoned a mate with a GPS, so drove the rest of the trip steering and changing gears with one hand as he turned, backtracked, and sped through the urban night.  Finally, after a steep climb from the lake side along a medieval 6-feet wide cobbled street of old, shuttered buildings and alley-ways, we arrived outside the small Hotel San Geralamo.  Andrea insisted on carrying our bags in.

It was now near midnight.  The Senora brought us a beer, prosecco and olives to enjoy on the terrace in the warm night.  Up to our right was a monastery and castle.  We could see the lights ringing Lake Como and the mountains.  Then we were taken across the road and through a garden to our room in an old 3-storey building with exposed beams, timber flooring, and old, hand-rendered plaster in strong, autumn colours.  Beautiful.  We booked for another week.

The next morning was the day!  Moto Guzzi GMG 2011.  Half-a-dozen Guzzis were firing up outside the hotel, including two Cali outfits, Brevas and Sports, with riders and pillions from Sicily, Denmark, Austria and Holland.  How we envied them being able to ride.  We caught the train to Mandello which was packed.  The town’s parks had been turned into camping grounds, so every blade of grass had a tent and bike on it.  The early birds had grabbed sites on the shores of Lake Como – what a setting.  We watched the procession of bikes weave through the traffic and pedestrians and food stalls.  The factory/museum area was chokkas.  But I balked at paying 18 Euro to enter the Moto Guzzi shop for the privilege of buying something!  Eventually we found a prime location in the shade and spent an hour or two drinking English ale and eating lunch. Again it was hot and humid.  Californias seemed the most common bike, with colours that we’d never seen before.  The most decrepit grey Cali we’d ever seen drew a crowd, and we later saw it leaving with its equally decrepit rider but attractive pillion.  I also noted that the Breva Sport 1200 seemed to outnumber other CARC Guzzis.  Coppers patrolled through on Stelvios and Norges.  I was disappointed that there wasn’t much in the way of merchandise for sale.  With 20,000 Guzzi fans present, Moto Guzzi could have had an open-air stall. 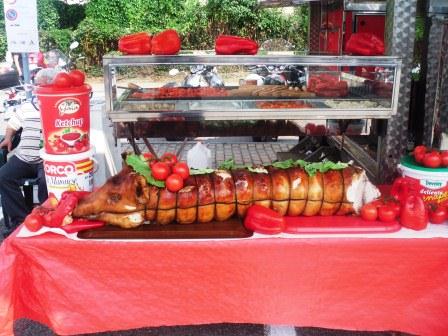 Drops of rain fell on us as we waited for the train.  By the time we had returned to our hotel, the heavens had opened up.  No tent could withstand that tropical-like rain, we reckoned, with its accompanying thunder and lightning display over the mountains ringing the lake.  The evening concert would have been washed out.  Sunday was also very wet, but warm, as we watched the Guzzis load up and depart San Geralamo, the water pouring down the cobbles.  The local paper had a page about the event, with Tony Horn of the Moto Club Guzzi of Victoria (sic) featured.

We spent the week visiting Milan, Lecco, walking the hills and taking a ferry on the lake.  Unfortunately we never made it to Bellagio which is supposed to be very beautiful and historic.  Plenty of Guzzisti stayed touring the area so we encountered them most days.  Watching the scooters became a past-time; traffic lights were like the start of the Moto GP 125s.  We visited the Guzzi museum, too, and the Guzzi shop which was barely big enough to swing a cat.  Jane declined the use of their “footprint in the floor” conveniences (the only ones we saw in Italy and France). 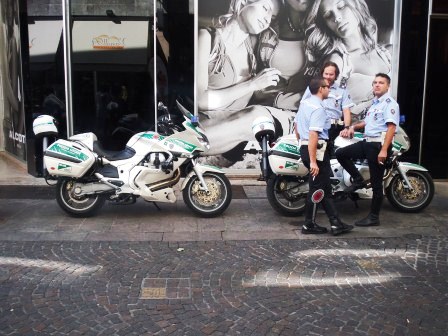 We caught the train back to Paris and stayed at a B&B for a few days.  Once again, crossing the border, my Australian passport was ignored but the UK one was scrutinised.  Paris is a pleasant city, with wide, tree-lined streets and an efficient underground.  Buy a ticket and you can use it on trains and busses.  (The ease of public transport ticketing in London, Paris and Milan makes one embarrassed to be a Melburnian).  Then back to London for a few days and home.

My most overwhelming impression of motorcycling in Europe was the sheer penetration of BMW.  In France and Italy, they outnumbered ALL other motorcycles brands combined.  Even in sports bike-mad UK, they were the most numerous individual brand.  For a bike that’s been whacked with the ugly stick, they’re doing something right.  Moto Guzzi, on the other hand, located in a small regional town, has a small-town mentality.  Hopefully recent changes will work to its advantage.