I went for a two-hour fang on the Breva 1100. About 10kms from home I detected a whistling sound through my ear plugs. Visor? Nope. Windscreen? Nope. I played with the throttle and clutch – the sound seemed to change with revs. To me it sounded like the whistling some car fan-belts make at idle.

By the time I reached home, it was loud enough to draw the Chief outside to see what it was. Maybe it was the alternator belt.

I popped the bike on the centre-stand and started her up. Nothing. I revved her. Nothing. Well, couldn’t be the belt, I reasoned. I clicked her into first and as I eased out the clutch lever, the sound started up. Leaning over the bike I reckoned that it came from the CARC.

There wasn’t any oil on the rear rim and it didn’t move when I gave it the 6 o’clock—12 o’clock wobble test. Maybe it’s the brake caliper. I removed the caliper and lay it on the floor. Nope, the sound was still there as I eased in the clutch. The next morning, I went through it all again but there wasn’t a sound from the cold bike. I took it for a short run and it was normal until the bike reached operating temperature…then it started again. I pulled the alternator cover off but the belt looked fine.

I removed the CARC and posted it up to Peter Roper at Moto Moda in Bungendore. He was dubious when I spoke to him. He looked it over and bolted it onto his Stelvio and gave it some curry over the weekend. A clean bill of health! He posted it back. 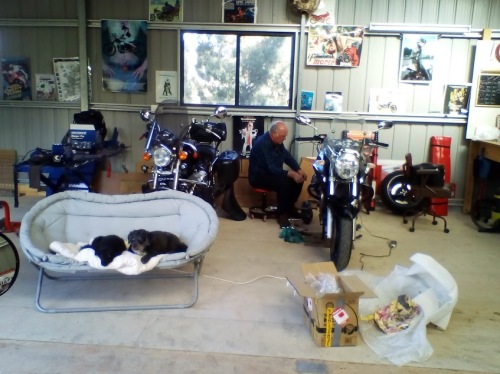 Replacing the CARC after its test by Moto Moda in Bungendore. Mick and Paddy offering support.

But the noise was still there when I rode it!  I didn’t want to ride the bike anywhere, so I’ve freighted the whole bike up to Bungendore with Road Hog Transport for Moto Moda to check it out. 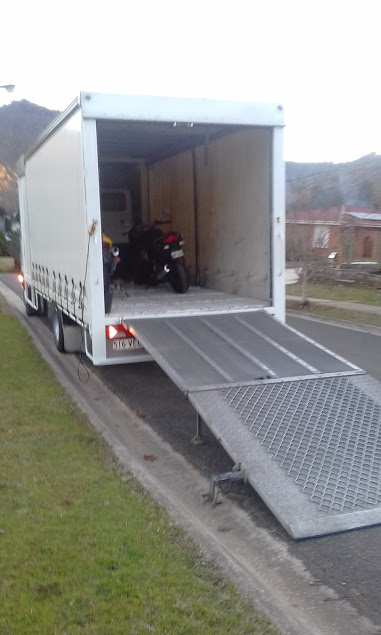 There’ll be a bit of a delay because Pete’s touring the USA.  Fortunately, I also have the EV.