Having piked out on removing the swing-arm and re-greasing the bearings of my Breva 1100,  I contacted Peter Roper at Moto Moda in Bungendore, NSW, about having some work done on the Guzzi.  The bike is now 11 years old and I’ve been doing all the routine servicing on her for nearly a decade.  It was time for a mid-life assessment by someone who knew what he was doing.  I’ve always preferred to deal with the bloke who was actually going to do the work, rather than an impersonal dealership.

A slow-moving high pressure system was sitting over south-eastern Australia as I set off in 5C, in and out of fog near Myrtleford.  I headed up the Hume Freeway in 15C, avoiding the cold and black-ice of the more interesting Corryong-Batlo route.  Crossing the Kosciuszko National Park was out due to snow and ice.  As highways go, the Hume isn’t too bad as it rolls over and around the foothills of the Great Dividing Range.  From Murrumbateman I cut across to Bungendore to stay at the Royal Hotel.

The swing-arm was removed and the bearings were found to be in good condition.  Mike repacked them.  “I guess they’re good for another 50,000kms”, I ventured.  Nope, said Peter, good for the life of the bike unless I do a lot of riding in the wet.  I don’t.

Mike noticed that, after re-greasing the needle bearings, I’d reassembled the rear shock-absorber linkage incorrectly – the “top-hat” spacer was on the wrong side.  Further investigation showed that a needle bearing was missing.  Maybe missed on assembly at the factory, Peter said, diplomatically.  Sheez! 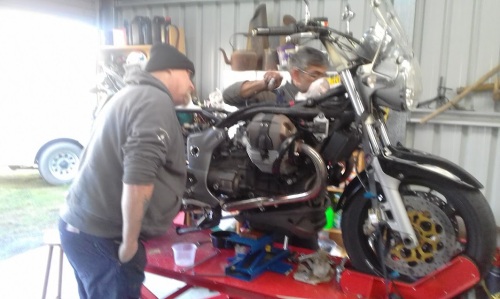 Peter and Michael working on my Breva 1100.

The oil pressure sensor had been playing up intermittently but a replacement hadn’t arrived in time.  Put back the original, sez I, which they did after washing it with contact cleaner.  (Works perfectly, now).  Mike removed the airbox to work on the oil pressure switch and noted that the throttle bodies were clean.  Peter reckoned that was because I didn’t ride hard enough and pressurise the crankcase!

The brake pads did not need replacing.  I’ve done 65,000km on the original pads and they’re still 90% okay.

Mike also found that both Hepco Becker engine guards had cracked at the top weld.  He would have welded them for me, but I didn’t have time to stay.

Mike balanced the throttle bodies.  “It runs like shit”, sez Peter.  It ran fine when I brought here, I protested.  “No it didn’t, so we’ve uploaded a Sport 1200 map” – (developed by “Beetle” in Wagga Wagga).   Mike said he could hear Peter yahooing for miles when he took it for a test run.  I took it for a run.  Geez, that’s a beautifully smooth, graduated map.  The torque rampages through each gear.

I waited until 11.00am for the fog to lift but it didn’t.  I was more afraid of the kangaroos.  It was 5C and I had to swipe my visor every few seconds.  I glanced at the instruments to see the fuel consumption was 7L/100kms!  Jaysus!  Then I remembered that the ECU had to “relearn” after a new map was installed.  It slowly improved to the usual 5.4L/100kms.

Cold, wet fog from Bungendore, through Murrumbateman, Yass to Conroys Gap.  Then into 8 OKTAS of blue sky and sunshine.  The temperature leapt to 10C then 15C.  I refueled at Gundagai and ran three hours straight through to home – the last hour in pain with sore hamstrings – I don’t ride enough!

3 responses to “Run to Roperville, Bungendore”

Lifting the lid on history